I was out of sorts yesterday!  It started with a less than optimal night’s sleep.  I have become a light sleeper over the years and am very sensitive to sound and light.  I’m particularly sensitive to my husband waking me up to place a bandaid on his clean-shaven head where he’d nicked himself and was certain he’d bleed out if I didn’t wake up and wrap his head in gauze.  (Hard to tell which of us is being more dramatic!)  Then there was the thirsty cat who refuses to drink water out of a bowl.  It must be in the bathtub or remnants from the shower.  At 5:14 a.m.  Grrrr!

So I was grumpy at breakfast and didn’t want the leftover hash from the night before as I had planned.  We were out of eggs, bananas, and everything else breakfast-y on this program (like eggs and bananas!).  Yes, I know I’m repeating myself.  I settled for a small bowl of frozen blueberries topped with coconut cream, cinnamon, and toasted coconut.  It was good.  It was cold.  It certainly didn’t warm my mood.  And it didn’t have protein so I was even more off balance.  I know better.  I did it anyway.

I perked up a bit when I met with a client to go over my favorite meal planning program.  She’s in one of my current RESTART classes and is a breath of fresh air.  Just what I needed.

From there I volunteered at my daughter’s school, reading with adorable 4th graders.  I love them!  One little girl was reading a book about spirit animals.  She explained that her spirit animal is a cat.  She has a special bond with cats, she told me.  She asked what my spirit animal was.  I wanted to say shark but I knew that wasn’t true, plus I didn’t want her to be scared of me.  I asked her to keep reading.

As I was signing out of the school office with no time to spare, another parent stopped to grill me about the upcoming auction, for which I am 1/3 of the planning committee.  I smiled politely while visions of daggers flew out of my brain in all directions, luckily missing every soul in sight.  This completely innocent and well meaning parent had no idea the danger she was in and I finally escaped without putting anyone in peril.  Phew!

My next stop was the vision shop to pick up my new glasses.  My prescription had changed slightly and since purple is my new favorite color, I was excited to finally get my new “dusty plum” frames.  I could tell the difference immediately and hoped I would get used to them with an hour or two of wear.

Off I went to meet a client for lunch at Cultured Caveman in my new purple frames.  Our lunch and conversation was delightful.  I had nearly the same thing I had on Sunday, chicken broccoli ranch wraps, but with a side of more broccoli instead of soup. 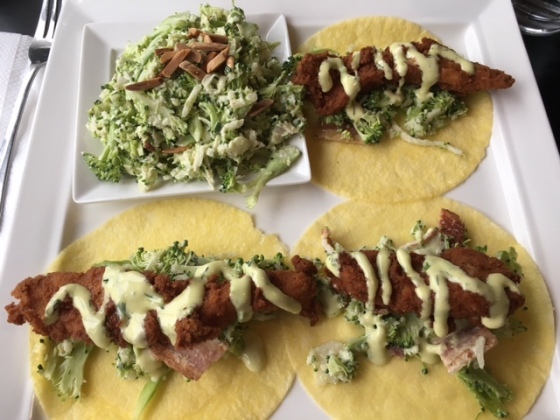 I knew there was a problem as soon as the server set my plate in front of me.  It was about to slide off the table and crash to the floor.  I asked my lunch date if the table was in fact tipping strongly to the left.  She didn’t think so.  So I moved on and tried to ignore my messed up depth perception.  We treated ourselves to pints of decaf coffee mixed with coconut cream.  I started to warm up.

When I got home I crawled into bed and tried to take a nap.  I was thwarted by my Havanese, Radley, whom I love dearly EXCEPT when he goes into Cujo mode because the mail carrier brings a package to the door or a delivery truck pulls up to leave a package for the neighbors or someone walks by in the distance walking their dog.  He scares them off with his vicious barks and killer growls.  He weighs 10 lbs. but he’s sure he weighs at least ten times that.  So, no nap.

Earlier in the day I pulled some salmon fillets out of the freezer for dinner.  Pistachio crusted salmon, sauteed kale, and green salad were on the menu.  However, I wasn’t in the mood.  All I wanted to do was isolate myself from everyone around me and sleep.  When I attempted to pull dinner off as planned I realized the salmon was still practically frozen solid.  This was my out, my excuse to make the pancakes I was craving for dinner.  So I did.

[As I was standing in front of my kitchen island about to pour the batter onto the griddle, the counter was tilting strongly to the left and was no longer the shape of a rectangle.  Sigh!  So as not to completely implode, I took these new glasses off and put on my old ones.  The counter was righted.]

Yes, I had both blueberries and a green tipped banana all in one day, but I chose it consciously, enjoyed it thoroughly, let it go, then went to bed.

And I slept really, really well!