It’s already day 14!  We’re 2/3 of the way through.  This time next week will be our last detox meal!  My husband asked if he can open a bottle of wine the morning of day 22.  I told him it would look bad if he showed up drunk to our last day of class.  He agreed.

So I’ve been thinking a lot about what foods I will leave out and what foods I will reintroduce when this is over.  I won’t be as restrictive with fruit, though I do love blueberries, grapefruit, green apples, and green tipped bananas.  But I also like melons, grapes, and most other fruits.  I’ll definitely bring back chocolate, but not Trader Joe’s Honey Mints, just dark chocolate (85% preferred, 73% minimum).  I don’t eat a lot of chocolate – a square or two will do.  I think I’ll allow a bit of honey in my morning tea because I like it better that way, let’s be honest.  I’ll keep bread out, unless I’m dining at The Brooklyn House because they have the best gluten free garlic bread ever.  I’ll only eat rice with Asian and Indian food.  I haven’t made up my mind about oats, though I’m leaning towards leaving them out.  Grains aren’t good for autoimmune diseases and I have Hashimoto’s.  Red wine will be back in the line up, though I’m good with one glass a couple times a week.  I’m already gluten- and dairy-free and that certainly won’t change.

I have a couple of other concerns that I’m thinking are food related:  I tend to have phlegm in my throat most mornings requiring me to constantly clear my throat.  I also have excruciatingly itchy ears.  This has been a problem for decades, but it drives me crazy and keeps me awake some nights.  My ears produce almost no wax.  Is that weird?  (Andrew offered to give me some of his but I declined.  Ew!)  My hunch is that these issues are caused by one of three things:  eggs, coconut, or butter.  Butter or ghee (clarified butter) is the only dairy in my diet, but maybe I’m more intolerant that I thought?  My problem is with the casein (protein) in dairy and butter hardly has any casein so I kind of doubt it’s the problem.  I have coconut milk in my tea every morning, so could it be that?  Seems odd, but possible.  I’ve been eating tons of eggs and they are a major allergen for some people.  I gave up eggs a while back and didn’t notice a big difference in my itchy ears.  Anyway, I’ll probably give each of these up for a period of time, separately, so I can see if my symptoms go away.  If it’s still unclear I’ll go get muscle tested.

Back to food.  Breakfasts are pretty much the same couple of things.  Yesterday was bacon, scrambled eggs, and grapefruit.  Today was the egg/banana pancakes with butter, cinnamon, and toasted almonds.  Lunch yesterday was a yummy pumpkin spice smoothie which I forgot to take a picture of.  It had coconut milk, a green tipped banana, pumpkin, spices, and gelatin protein powder.  Dinner last night was more of the chicken mole from the night before, with avocado slices.  Not great, but I wasn’t going to waste it.  I had lunch today at Elephant’s deli.

This afternoon I had 6 oz. of GT’s Gingerade kombucha and about a tablespoon of roasted sunflower seeds, just before I took my kids to see Hidden Figures.  We all loved it!  Totally worth seeing!!

After the movie I had a hankering for a burger so we had bun-less burgers and roasted yams.  My kids wouldn’t eat the yams.  Their loss!  (I still haven’t told them that there were yams in the carrot ginger soup they loved the other night.)  It totally hit the spot.  I just placed the burger, avocado, red onion, mustard and dill relish between the lettuce and ate it like a hamburger.  Before Andrew knew there were yams roasting in the oven he was sniveling about not having potato chips with our burgers.  Somehow in the last year we’d gotten in the terrible habit of eating potato chips every time we had burgers.  Even though I only buy potato chips cooked in olive, coconut, or avocado oil, I’m keeping them out too.  That is one habit I don’t want to get back into. 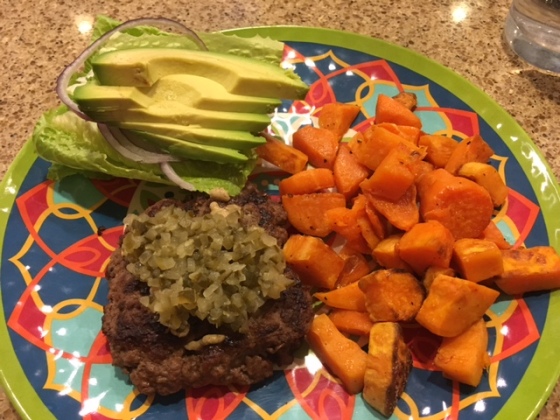