I was invited back on KGW News Channel 8’s Portland Today show this week to discuss the health benefits of maple syrup. Real maple syrup and raw honey are the two sweeteners I often recommend to my nutritional therapy clients because they are far healthier than, say, table sugar.  But I hadn’t really looked into maple syrup’s benefits specifically until now.

Research at the University of Rhode Island finds that real maple syrup (the kind with just one ingredient – syrup made from extracting the sap from sugar maple trees), may help combat chronic inflammation.  Chronic inflammation is the root of heart disease, cancer, Alzheimer’s, diabetes, and so on.  Aside from it’s deliciously sweet flavor, maple syrup also shares some of the same beneficial compounds found in berries, tomatoes, tea, and red wine.  These compounds can help protect the body’s immune system, thus fighting off inflammation.  Additionally, emerging research is showing that maple is linked to a healthy gut.  Dr. Navindra Seeram, a renowned research at URI, is presenting these findings this April at a global symposium at the American Chemical Society conference.  Dr. Seeram has been studying maple syrup in his laboratory since 2009.

That’s great news as far as I’m concerned and reason enough to pour it on!  As I was considering my presentation, I remembered that I have a friend in the maple syrup industry.  My longtime friend Mary is married to Don DeFlorio, who owns a 34 acre maple farm in Randolph, Vermont:  Macintosh Hill Maple Works.

He’s there now, as it’s peak Sugaring Season (late February through early April) where he produces over 500 gallons of real maple syrup on site in the sugar house. 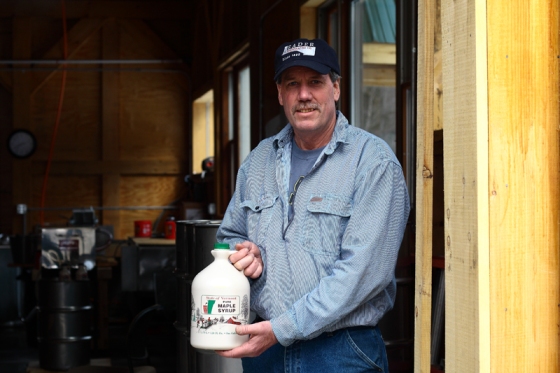 Did you know that maple syrup has a new international grading system?  Gone are the “Grade A” and “Grade B” which have to do with the color and richness.  The new system categorizes maple syrup in three ways:  Golden Delicate, Amber Rich, and Dark Robust.  All three have the exact same sugar content (66 “bricks” in maply syrup lingo), but vary in color depending on how long the sap is boiled.  The darker the syrup, the longer it’s been boiled.  As the names imply, the lighter syrup has a more delicate flavor and is perfect on top of yogurt and fruit.  The darker syrups are more commonly used on pancakes and waffles. 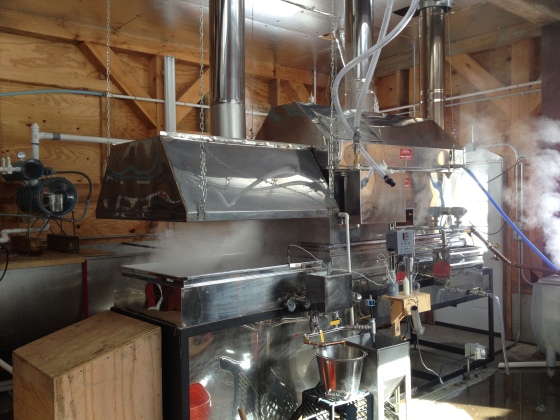 As luck would have it, Mary’s here in Portland and generously supplied me with all the maple syrup for my television segment.  I wanted the viewers to be able to see the different colored syrups, and the hosts to taste the differences.  I also wanted to show that there is absolutely nothing nutritionally redeeming about “syrup” that many American households use instead of the real deal.  In fact, “pancake syrup” and real maple syrup have nothing in common.  The former is high fructose corn syrup with “maple flavoring” and caramel food color.  YUCK!  Real maple syrup has just one ingredient – maple.  Portland Today’s hosts Cathy Marshall and Rod Hill seemed to enjoy their maple syrup shots, but Rod was clearly distressed by the “non-maple syrup maple syrup.”  The look on his face spoke volumes and admittedly I felt bad for offering it.  It landed in my trash bin the moment I got home.

I also made a maple syrup sweetened chocolate pudding for the hosts to try, plus extras for some of the off camera show peeps.  It didn’t disappoint! 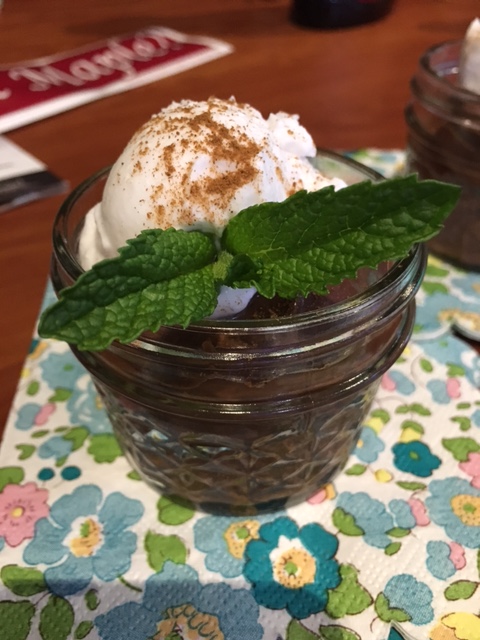 Here’s the link to the segment:  http://www.kgw.com/entertainment/television/programs/portland-today/maple-syrup-as-a-sugar-alternative/425025851

Thanks again to Don and Mary for their delicious real maple syrup and to Portland Today for having me on again.  You can contact me if you’re interested in purchasing Macintosh Hill Maple Works syrup.  It’s also available to purchase at Kruger’s Farm on Sauvie’s Island.  Check their website to find out when they open for the season.